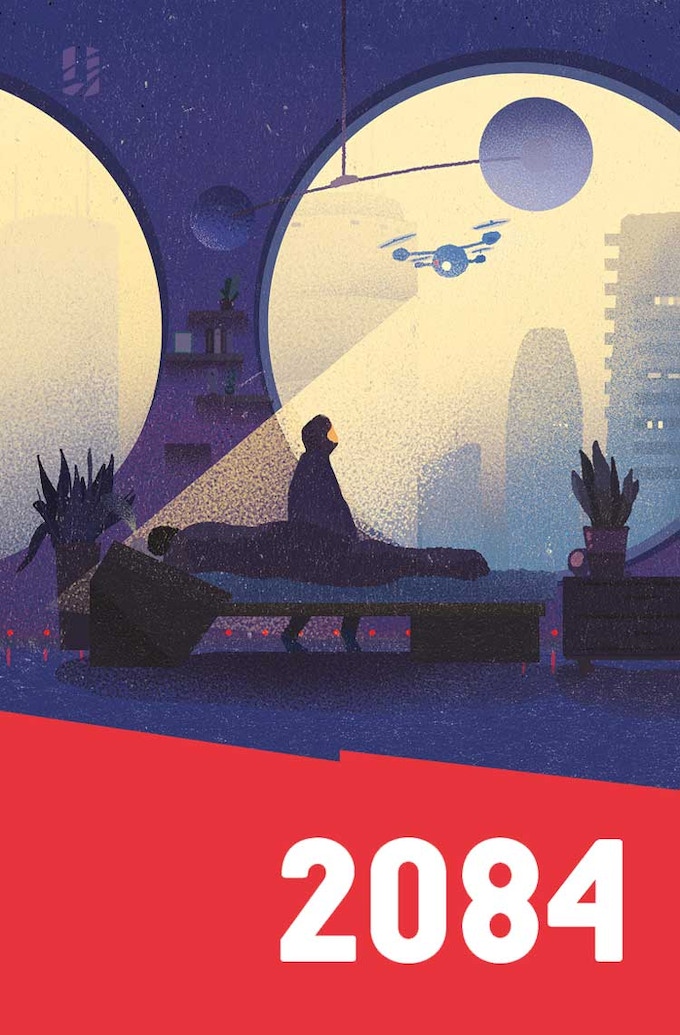 Our friends at Unsung Stories have just entered the final week of the Kickstarter campaign for 2084. The project is currently sitting at 502% funded, which is not particularly surprising when you consider that a) 2084 is a rather timely science-fiction anthology inspired by Orwell’s iconic novel Nineteen Eighty-Four, and b) the collection features a remarkable group of writers, including the likes of Jeff Noon, Christopher Priest, James Smythe, Lavie Tidhar and Aliya Whiteley.

We took the opportunity to chat to the aforementioned Mr Noon—author of the Clarke Award-winning Vurt series amongst other books and fictions—about 2084, his Twitter micronovels and ‘avant-pulp’.

I have very little interest in political art, or propaganda, or any kind of story with a message, or with a fixed belief system in place, left or right. As a writer I’m interested more in human drama: why do human beings do what they do, whether for good or for ill: rather than outside forces, I’m obsessed with what drives them from the inside. So I started to think of a way of writing a story influenced by Orwell’s 1984 that didn’t have an overt political content. Quite a task! But the thing I loved most about the book was the love story, so a little bit of that creeps into my story on the final page: a reuniting. I thought about events that might happen after a regime has fallen, and a new one has taken over. How would this new regime deal with the after-effects of the old? That seemed to me an interesting question. And then I thought of Winston Smith’s job in 1984: he changes documents and photographs in order to take account of the constant changes in the official history, as people are killed off, or made to disappear. He slips documents into a “memory hole”, his version of our paper shredder.  And then I imagined a civil liberties campaign that forced the authorities to store these facts and images, rather than simply destroying them, to actually keep them in memory, somewhere. From there the idea of an orbiting space station took hold, a giant archive in the sky, where all the forgotten “ghosts” could reside. The story more or less wrote itself from that point. Over the last few years, I’ve become fascinated with the concept of the subtle body, the ghostly figure, the tulpa, as they call it in Buddhism, but strictly in science fictional, or post-technical terms. I think this is my reaction against the extreme digitalisation of human thought and behaviour: a return to the spectral. So that idea fused with the 2084 theme, to produce a series of ghosts in storage; and the human operatives who look after them on the station, and who attempt to restore the ghosts to their Earthly life.

Can you talk a little about your relationship to music, especially about how it relates to your writing?

Actually, music doesn’t mean quite as much to me as it used to. My tastes are changing as I get older, and I find that these days I spend more time reading novels, especially crime novels, rather than listening to music. That said, music has played a very important part in my work, and will no doubt continue to do so. For a good number of years, I explored in some depth the idea of remixing stories in the same way a DJ or techno artist might remix a tune. This probably reached its climax with my music novel Needle in The Groove, and the experimental book, Cobralingus, which was a very explicit attempt to replicate the varied effects of music software on a text. And more recently I’ve written plays with musicians as the central characters, one about a Mod band, and another about Britain’s first all-female rock band. Both of these are set in the 1960s and feature original songs. I started playing the guitar again and writing tunes and lyrics, after twenty years of not doing anything of the kind: a strange journey. So music still interests me, but more as a subject matter these days, rather than a process to be copied. I do still use some of the remix techniques, especially to create my microstories on Twitter. It’s very useful for that kind of short, quick fire, everyday work, where ideas have to be generated from next to nothing in quick succession. Images fire off each other, like notes in a jazz improvisation, and stories emerge from the sparks and fractures.

You seem to enjoy working in various formats, most notably your short ‘spore’ stories on Twitter. Do you find such constraints helpful?

Yes, the limited format of Twitter is a constant source of delight. I’ve been writing the spores for about six years now, and I’ve probably got about 5,000 of them on file! The best ones work, I think, when an entire story is implied by the few words and sentences, almost like the 140 characters are an echo of a much larger text, with characters and plots, etc. I’m very happy when I manage to produce one of those, where the reader has to almost decode the story from the fragment. But really Twitter is my laboratory, my place to experiment: I don’t think too much about quality: as long as a spore reaches a certain standard, I will put it out there, and see how it fares. And of course some of the ones that I don’t think that much of, turn out to get a good number of retweets, so who can tell? I then take my favourites tweets and transfer them to my Facebook page. For this, I extend them a little if they need it, set them out in different ways, give them a bit more blood and bones. They’re still short, but some of them might now reach a paragraph in length, or on occasion a page. So Facebook is more like a gallery. That’s how I see it. And then I transfer the very best ones to another document, which will form the contents of a book one day, called Pixel Dust. I’d like it to be illustrated, if possible, and I’m looking into that, seeking publishers and so on. I’d love to see some of the spores given a more physical life. From quick sketches to considered ideas, to stories and drawings in a finished book: that seems to be an interesting pathway for a bunch of words to take.

You are one of the only writers I know who has written a manifesto. What provoked ‘Avant Pulpism’?

I do miss the age when artist and writers issued manifestos. Post-Modernism really put an end to the practice, I guess because the whole idea of believing in one thing went out of fashion. There are a few surviving exceptions. The idea behind the avant-pulp started when I first heard the 1986 album Avant Pop, by Lester Bowie. That fuelled the concept. Years later, when I became a novelist, I decided to put some ideas down on paper, to see where they might lead. My earlier story collection Pixel Juice came with a subtitle: “Fifty Stories from the Avant-Pulp”. At its heart, I see the concept as a fusing of high art and pop art. I tend to describe it as Raymond Chandler writing Ulysses, or James Joyce writing Farewell My Lovely. Take your choice. I wrote the manifesto for my own enjoyment, initially, an exploration of possibilities, more than laying down any kind of rigid belief structure. Maybe there was an urge to provoke in there, as well: a common element of the manifestos of yesteryear. I love science fiction, both in narrative terms and as an idea. It seems to me a perfectly viable way of talking about the present moment, and human desire, all translated through a vision of the future, be it centuries from now, or tomorrow. And I think that desire for change and experiment fed into the ideas behind avant-pulpism. My own work varies a lot, from writing experimental pieces to straightforward novels. But most often I find myself digging around in-between somewhere, trying to find a way of telling a good story through more avant-garde techniques. I think that’s a very fertile ground, and I hope to explore it further as the years go on.

More about Jeff Noon and his work at his website.