Review: I Am Currently Working on a Novel by Rolli 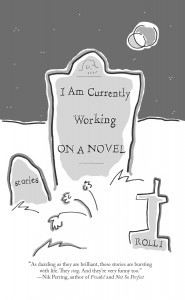 I have a confession to make. (Another one.) I am reviewing a work of flash fiction, I Am Currently Working on a Novel, by Rolli, who lives in Saskatchewan. And I don’t really know what flash fiction is. Like, I just don’t get it. It’s short, and somehow different from poems, not that I really get poems either. Like condensed, telegraphed stories, stories without characters or plots. So maybe take what I say about Rolli’s flash fiction with a pinch of salt. Or whatever flavouring you’d prefer. I like cayenne pepper.

I Am Currently Working on a Novel is a collection of a lot of stories. I haven’t counted them, but there are a lot of them. Most of the stories are short, but reading them is oddly exhausting. The effect is a bit like listening to a pop album, one of those bubblegum pop CDs that exist only platonically, where all the songs are breathless and pleasurable for two minutes and they all sound the same. Like pop songs, Rolli’s stories have ways of using language that seem wide-eyed and memorable but don’t mean very much when you think about them.

For example, “What keeps so many of us moving, what keeps us breathing, through the week, is the weekend. We form a vision of meaning and float it, over our heads, like helium balloons.”

Now I’m not against pop songs, but I don’t often read them. I certainly don’t read whole albums. To me they seem incoherent, like jelly on paper when I want something crisper and more structured. Maybe sweet potato fries. Cooked with paprika and a dash of cayenne pepper.

Pop albums have this way of structuring themselves that doesn’t necessarily lend itself to appreciation of the whole. The songs reflect each other, with moments of recall, sometimes shared names or places, often the same tone or mood, images and phrases repeated just enough that you notice, but you’re never sure whether it’s some kind of unconscious auto-plagiarism. I want meaning, but it is hard to find amongst the noise.

I should have said though, if Rolli is like an album, it’s more like one of those bubblegum pop LPs made by an indie band—shot through with perversity. Most of the stories in this collection have the same mood: matter of fact about dreamlike occurrence, self-contradictory, with sorrow not far from the surface. The surface itself is shiny, sunny even, and often funny:

In another story, someone else lives in a well. She is a good example of Rolli’s fairytales turning sad: “When my cakes don’t turn out right, I throw them down the well. Then I hang my head over the edge of the well and my tears fall down into it. Recently my husband complained that the well water has begun to taste suspiciously like tears and cake, and if this doesn’t soon change, he will take my face. The faces of several young women in their prime adorn the kitchen walls.” OK, so, she doesn’t actually live in a well, she just cries in one.

The closest I have come to understanding this sort of thing is Kafka. He has a story of which I am quite fond called ‘The Vulture’. It is only about half a page. It is about a vulture. The vulture is hacking away at a man. The man is not happy about this situation, exactly, but he is bearing it pretty well, all things considered. A second man finds the first man’s passivity shameful and offers to help. This help does not go all that well. I won’t spoil the ending.

Now, it’s not really fair to compare anyone to Kafka. But, Rolli, my apologies, I’m going to anyway:

It seems to me that everything we get in Rolli we could be getting out of Kafka, and we aren’t getting anything new or exciting. Rolli’s situations are absurd, sad, funny, lucid. They end as punch lines or in contradictions. They don’t have Kafka’s tone, though, or his vast depth. They don’t seem like they could be about anything and they don’t seem like they are about everything. To be honest, most of Rolli’s stories don’t seem to be about anything. ‘The Vulture’ or ‘Before the Law’ seem like they could be the most glorious metaphors for all of human life or for whatever else the reader wants. A story of Rolli’s, like ‘Thumbs’, in which a man cuts off his thumbs and then gets fake thumbs, and is happy again, just seems to be about thumbs. Even though the whole story seems like it’s about how desire is perverse and can’t really be satisfied, or some other really universal thing, it still just doesn’t seem to be about anything.

I think the difference is one of style. Kafka, of course, is Kafka. Rolli is very North American, sort of Salinger or something. His writing is a lot flatter. He relies heavily on two techniques. I don’t know if they are representative of flash fiction or not, but they are very representative of Rolli.

Rolli often introduces a short juxtaposing sentence at the end of a paragraph that seems quite unrelated and is designed to inflect everything that proceeded it differently. For e.g.: “I wrote something down on paper and slid it under the door. It said, ‘At the Smoker’s Lounge.’ Janet didn’t think it was funny. She has a degree.” It isn’t clear why this degree thing is relevant, but now it’s inflected our idea of Janet—she’s sort of a snob or something. It’s also a joke: the juxtaposition performing this perverse dream logic. Of course she didn’t think it was funny, no one with a degree finds it funny.

The other thing Rolli does often (and by often I mean in pretty much every story) is delaying the final word of the sentence with an ellipsis or a dash. Usually this delayed word is unexpected. This technique is just another kind of punch line. Here is a passage characteristically dense with these ellipses and dashes: “The precipice. Near … our home. On the edge of town. I should not have thought of it. Yet it remained a thought. On the edge—of the mind. I would be working. Yet thinking…of the precipice. I would be speaking to my wife, and yet thinking. So slowly breathing, sitting, and facing…the bookcase. When I heard footsteps, I reached for a book. She imagined I was reading.”

Here’s an example that’s really like a joke: “The ghost of Winston Churchill was chasing the ghost of a cigar. I was kind of rooting…for the cigar.”

So I think my problem here is that I Am Currently Working on a Novel feels like a collection of hundreds of jokes. And some of them are very funny. I like this one: “I used to bend spoons in the 70s. Now I bend an assortment of other utensils.” I laughed. I like the word “assortment.”

Some of the jokes are less funny. Most of them, in fact. I don’t see this as the collection’s major problem though. It’s not that it’s inconsistent—collections are almost by their nature inconsistent. It’s the opposite; it’s too consistent. It’s all jokes. Sad jokes, funny jokes, weird jokes, boring jokes, like you’d get in any good joke book. But I don’t usually read joke books front to back, like I don’t usually read pop albums. I don’t know how to read them.

I Am Currently Working on a Novel was published by Tightrope Books.