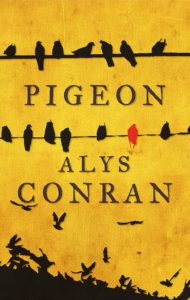 To many, pigeons are indisputably the basest birds in the book. Our connotations of the pigeon don’t usually stray far from Woody Allen’s “rats of the sky” or Tom Lehrer’s Poisoning Pigeons in the Park. A positive literary allusion to the pigeon is included in Vladimir Nabokov’s Despair, which is bespeckled with mentions of a “dove grey” suit. However, as Simon Barnes, quoted in the introduction to Pigeon, points out:

None of the main characters in Alys Conran’s atmospheric novel are what would be called ‘proper birds’. Set in working class Wales in the early 90s, the eponymous protagonist, Pigeon, lives in a shed at the bottom of his garden. His new stepfather, ominously referred to as ‘Him’, rules over the household with a tyrannical force, frightening Pigeon’s stepsister Cher into familiar submission, and watching as Pigeon’s mother slowly sinks into herself. The novel also centres around Iola, Pigeon’s best friend and accomplice. Iola and her older sister Efa live by themselves in a house on a hill, living their Nain’s mantra, “It’s a world unfair for women, love.”

With its avian title and focus around young narrators, one can’t help but draw connections between Pigeon and another bird, precisely, a Mockingbird. One likeness Pigeon has to Mockingbird is the presence of a mysterious outcast. Gwyn acts as a catalyst to the children’s imaginations because, according to Pigeon, “Gwyn = od”. Another similarity between Pigeon and To Kill a Mockingbird is that the childlike narration lends itself to a lot of irony:

And there’s Gwyn, on the sofa. The murderer. I can see his hairy neck, and the shiny round top of his head, and I can see his stubby hands and they’re…

However, Pigeon and Iola’s made-up mission against Gwyn soon takes flight, growing its own form and growing out of their control. Much of the novel focuses around Pigeon and Iola wrangling with their shared story, trying to tame it and claim it back. Conran’s narrative moves between English and Welsh fluidly and cohesively, and non-Welsh speaking readers should not be at all deterred, as most of the Welsh is contextually discernible without lacking in subtlety.

The novel switches between Iola’s first person narrative and an omniscient narrator that follows Pigeon and Gwyn. At times of hopelessness and containment the narrative seems submerged in grief, but never heavy. An attempt to preserve a consistent tone throughout the novel sometimes made it difficult to distinguish between narrators and I thought that a more unique voice for the omniscient narrator would have quickened the pace of the storytelling, or provided relief from the somewhat self-conscious narrative.

Amid the perceptive sensory details that paint a full portrait of a child’s world, Conran develops a sense of consistent lightness as well as an unchanging colour that adds form to the character’s myopic setting. On the basis of Nabokov’s elegant dove-grey, what colour would we call Pigeon in its entirety? I would say that it is set in a blue haze, full of feeling and confusion about the world that the young protagonists are growing into.

Pigeon offers us stirring meditations on language: that it is laced with history, diegeses are built with words, and that one’s language and one’s story are bound together. Reading Pigeon, one feels the collision of past stories and the attempt to move forward, making peace with the words that created a history. One of the most poignant instances in the novel is Pigeon’s discovery:

Your own language was a part of your body, like a shoulder or a thigh, and when you were hurt there was no defence. When the kids argued in Welsh at home on the hill it was a bare knuckled fight. But English. With English what you had to do was build armour, and stand there behind your shield to shoot people down.

Pigeon is a testament to the visceral nature of one’s own language versus the flexible formality of a presentational language, and how the two function differently in truth telling, tall-tale telling, and comforting others.