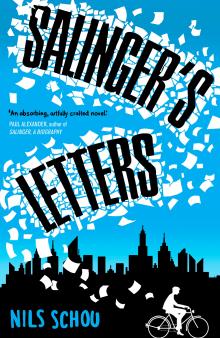 There has been a glut of recent books – I am thinking of Karl Ove Knausgaard’s My Struggle, or Elena Ferrante’s Neapolitan series, or Ben Lerner’s 10:04 – that dramatise the process of writing. Salinger’s Letters, the new novel by the Danish writer Nils Schou, does almost the opposite: it is a kind of anti-metafiction that actively doesn’t dramatise the process of writing. The protagonist, Dan, is himself a professional writer, but he constantly avoids discussing his own work, even though his involvement with a writers’ collective called the Factory is an important part of the novel’s plot. We only really learn two things about his writing: first that ‘I write about depression as little as possible’ and second that he likes to include his fellow writers in his novels ‘as secondary characters, disguised of course and under different names.’ If these things are true, they do not apply to Salinger’s Letters, which is largely about depression, and, rather than disguising the identity of real people ‘under different names’, features cameos from a whole range of very famous people – Elvis Presley, Marilyn Monroe, Andy Warhol, Woody Allen, and of course J.D. Salinger – as well as from a range of people who are apparently famous in Denmark like Lise Ringheim and Henning Moritzen. (I googled them to check: they are real people, Danish actors, both dead now.) So if Dan is trying to reflect meta-fictively on his writing process, he is not doing it very perceptively.

In the novel writing is not a creative process; rather, it is a process of relatively simple reproduction. Dan becomes a writer by mistake: he tells the story of his depression one evening at a party, and is lucky enough to be recorded, transcribed and sold to agents by an astoundingly efficient young girl named Puk, who happens to overhear him. She then invites him to join the Factory with two other writers; together they churn out all kinds of copy with various ease, and are met with an easy, fabulous success: ‘No one can touch [their colleague Boris] when it comes to media coverage, rave reviews, literary prizes, early membership of the Danish Academy, etc.’ That is, no one except Puk, who is also all of these things (somehow the possibility of Puk and Boris both being the most successful literary geniuses in Denmark at once is upheld). Despite their genius, ‘Basically all four of us were producers of fiction.’ The next page, we read the same thing: ‘The Factory’s core product was fiction.’ The point seems to be that the writers have genius and are derivative. The writing itself is in some way incidental. As if the Andy Warhol comparisons had not been made clear enough, the author reminds us that, ‘Puk was Andy Warhol, a machine pumping out literary products in the assembly line.’ And again: ‘Warhol knew that our Factory in Gothersgade had been modeled on his own Factory in New York.’

Warhol is just one of a line of famous people in the book who act as literary or artistic models. Dan has a brilliant idea, for example: ‘I stole it from Nora as soon as I heard it, who had stolen it from Bergson, who had probably stolen it from someone else.’ Production is a process of imitation; being a producer is much the same as being a fan. The novel portrays chains of influence that stretch indefinitely into the past, the most important of which is headed by Salinger, Dan’s own model. Dan and Salinger strike up a correspondence over their shared interest in Kierkegaard and depression. They do so as a continuation of Salinger’s correspondence on the same subject with Dan’s mentor Schroder. We are told that ‘depression was the leitmotif of their correspondence’, and, on the next page, that ‘Kierkegaard was depressed. He called it melancholy. Depression is a leitmotif in all his writing.’ This repetition of the word ‘leitmotif’ is important: it represents an almost genetic process of inheritance and imitation. The core of Salinger’s writing is depression, which he borrowed from Kierkegaard; the core of Kierkegaard’s writing is depression too, and so on. Kierkegaard is himself described as a super-fan, desperate to imitate someone else: ‘who was a greater fan than Kierkegaard? He wallowed in names […] He sat at Hegel’s feet in Berlin, he dreamt of knowing everyone who was anyone in Copenhagen and was beside himself with rage when he wasn’t invited to the right parties.’

We are offered this characterisation of Kierkegaard as Hegel fanboy when Dan meets Salinger for the first time; this is how Salinger describes his own hero. Dan seems to agree; he is thinking similar things about Salinger himself. Soon after, however, it is revealed that this Salinger, the one with whom Dan has just spoken, was an imposter, a phony actor hired by unscrupulous collectors to trick Dan out of the precious Salinger letters. The whole revelation is curiously underplayed: ‘When they realised I wasn’t going to sell the letters they had resorted to Plan B: The person I had interviewed was a fake. He wasn’t Salinger but a Salinger lookalike, an out of work actor who had presented himself as Salinger. The most sensible thing for me to do was to return to Denmark and keep very quiet.’ Which is basically what happens, although Dan’s wife reveals that she has pulled a similar trick and switched out the real letters for some copies. (She is essentially forgotten by the novel afterwards.) The message seems to be that the difference between this Salinger imitation and the ‘real’ Salinger is slight, at best. The process is later repeated with Puk, Dan’s colleague and patron: ‘The question was actually implied in the answer. There was no discrepancy between the Puk one met and the Puk behind the façade. There is no real Puk.’ Imitation, duplication, repetition: these are all easy, effortless almost, for Puk, for Dan, for Salinger and for the Salinger actor, and, by extension, for everyone else involved in creative production.

The process of repetition is performed throughout the novel by Schou’s habit of repeating himself several times in quick succession. For example, over the course of the two pages of a meet-cute scene with Dan and his future wife, she reminds him how annoying he is: ‘“You sound just as annoying as you look.”’ (60) ‘“God, you’re annoying. Are you always wagging your finger at somebody?”’ (60) ‘“Are you always so annoying in that particular infuriating way?”’ (61). Or Dan recalls his introduction to Amanda, a personification of his depression, who talks to him sometimes, and, near the end of the novel, tries to seduce him: ‘one night on an acid trip the depression had become a person, a woman, Amanda. That conversation completely changed the course of my life.’ And on the next page: ‘I later concluded that chance encounter was the turning point of my life’. Such repetition is one of those mimetic stylistic traits that comes desperately close to artistic failure, like writing a boring novel about being bored. Indeed, it is only with good faith that what could be seen as sloppy writing can be seen as deliberately sloppy writing with an aesthetic point. Salinger’s Letters earns this good faith by mining the leitmotif of repetition so deeply and in so many different contexts, but it does not make every specific incidence of deliberately repetitive prose any more pleasant to read.

Given that Schou has written a novel about depression, it is of course entirely possible that being pleasant is not his primary aim. While all this repetition and imitation may seem like a kind of stasis, a postmodern prison, Dan in facts perceives it as a kind of escape. His advice to those suffering from depression is to ‘Make it concrete, give it names, faces. Depression isn’t just depression. Visualize it. A depression is always people, faces.’ Dan creates Amanda as a coping mechanism, but the implication of the novel seems to be that he creates everyone else too. In this sense fiction is a way out, a way of making sense of depression, of confining and containing it. But it is ultimately futile: Puk writes (significantly) an article about fandom that Dan perceives to be aimed at himself: ‘Puk’s point was that idol worship is a kind of suicide in disguise. Instead of physically killing yourself you get rid of yourself by moving entirely into someone else’s universe.’ Writing itself is a kind of fandom, or prostrate imitation, or self-abnegating repetition. In that sense it is a logical thing for a depressed person to do, a joyless factory-produced suicide. Like Knausgaard’s My Struggle, Schou’s Salinger’s Letters ends with another kind of suicide: the writer ends his literary life, renounces creation, and embraces whatever is left. The novel ends with the Factory closing and the four colleagues, now for the first time friends, entering a life of emotional sympathy. It is a suicide caused not by exhaustion (as in Knausgaard) but by optimism. The result is warmth and emotional connection. Nils Schou, though, continues to write. The novel reaffirms itself as anti-metafictive: it offers a metafictive commentary on writing that it completely ignores.

Salinger’s Letters was published in November 2015 by Sandstone Press.

This website uses cookies to improve your experience while you navigate through the website. Out of these, the cookies that are categorized as necessary are stored on your browser as they are essential for the working of basic functionalities of the website. We also use third-party cookies that help us analyze and understand how you use this website. These cookies will be stored in your browser only with your consent. You also have the option to opt-out of these cookies. But opting out of some of these cookies may affect your browsing experience.
Necessary Always Enabled
Necessary cookies are absolutely essential for the website to function properly. This category only includes cookies that ensures basic functionalities and security features of the website. These cookies do not store any personal information.
Non-necessary
Any cookies that may not be particularly necessary for the website to function and is used specifically to collect user personal data via analytics, ads, other embedded contents are termed as non-necessary cookies. It is mandatory to procure user consent prior to running these cookies on your website.
SAVE & ACCEPT