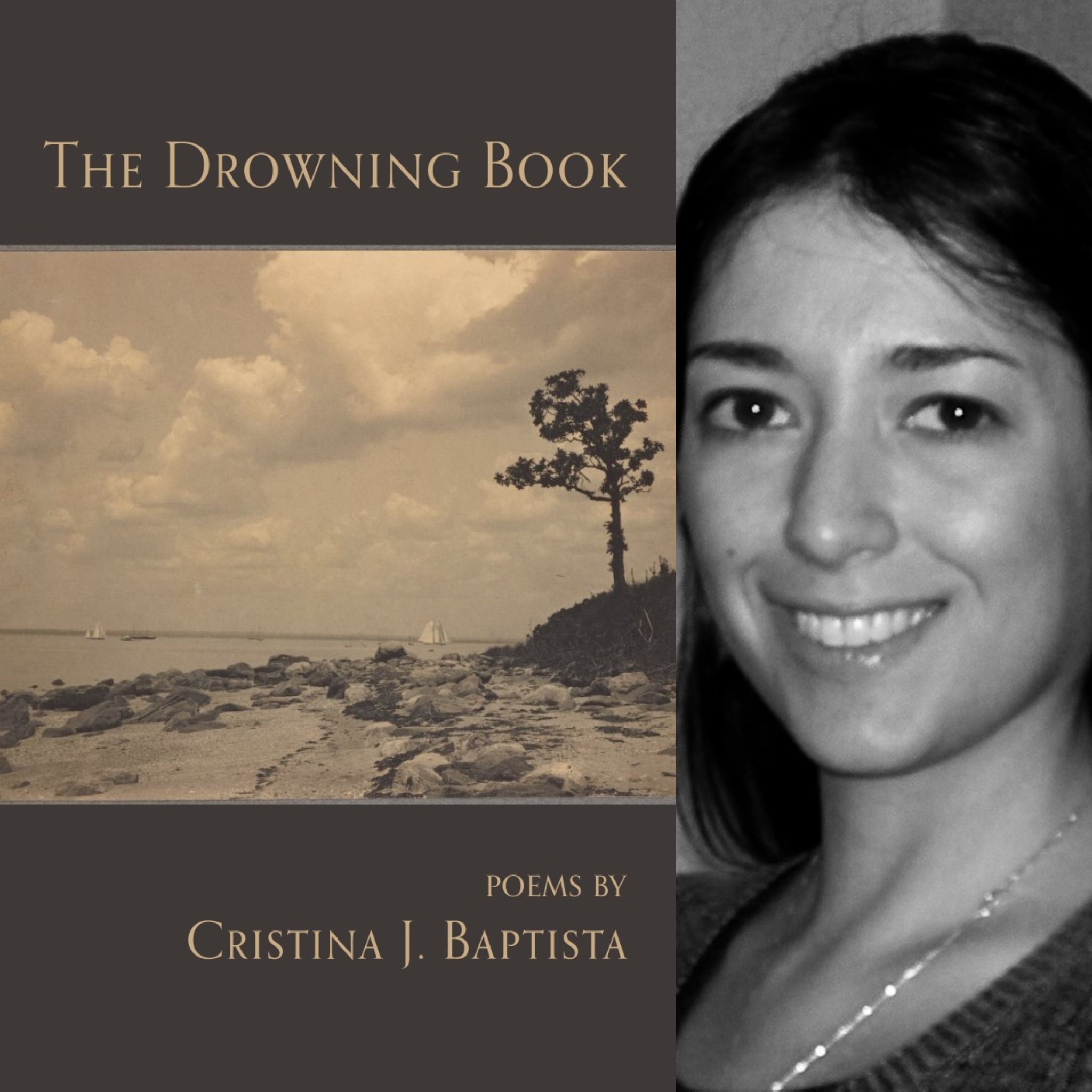 We talk to Structo alum Cristina Baptista about her new full-length collection, which opens with the poem ‘Trouble Woman’ from Issue 14.

I don’t know if The Drowning Book would have been possible without Gertrude Stein and William James. I began the project in early 2015, when I was teaching five sections of American Literature at a private high school in Connecticut and was introducing my students to Modernism, particularly the various poetic styles of the era. One of the exercises I had students tackle was taking headlines from the newspaper that week and, without reading the articles, start writing a poem sparked by the keywords in the headline. They had five minutes to write as much as possible without over-thinking. It was a very stream-of-consciousness assignment. After that, they had another five minutes to write a poem based upon an image that had to do with the year they were born. Then they had to fuse these poems together in some way that made sense to them (not via logic but rather intuition or gut feeling).

Not one to waste any time to write creatively, I did the assignment myself—and wound up with the drafts of five new poems by the end of the week. The students begged me to share my work in class—and as apprehensive as I was to read such hasty poetry aloud, I was encouraged by their enthusiasm and their questions about why I connected, for instance, a personal memory about reading Nancy Drew books as a child to a poetic line from Langston Hughes to a newspaper headline about women at the Met Gala dressed in costumes that made them look like flowers. I didn’t always have answers for my students because I just didn’t know. But I began to realize that a lot of my poetry is about women—their perceptions and how they are perceived; how they literally drown (the collection’s eponymous poem is dedicated to the 20-year-old woman in Dubai who, in 2015, was left to drown by her father, in order to preserve her honor) or how their voices are drowned-out by some other noise. I also felt like I was beginning to sink a bit beneath the weight of repressed memories bubbling to the surface now that the “Stein exercise” had catalyzed something. But I embraced it. I slowly began to surface, taking in new air.

It wasn’t long before I kept returning to these poems not because I thought they were necessarily strong but, rather, I felt rather haunted by how glimpses of my past—my childhood, random memories I had not considered for years, old adages or expressions my parents would say, or Portuguese superstitions from my ancestral heritage—kept resurrecting. As aforementioned, I felt like I was drowning in a nostalgia I barely recognized as my own. And, rather surprisingly, my personal feelings dovetailed with contemporary newspaper headlines. A literal drowning of a young girl made me think of Portugal and its history of whalemen and fishermen, as well as the irony that many Portuguese people in those careers never learned how to swim (in my own family, swimming lessons were not considered essential). A lot of ekphrastic poetry has worked its way into The Drowning Book, too. I’m particularly haunted by old buildings or cryptic-looking photographs—black-and-white prints, daguerreotypes, collodion-process prints, and the like. Old places awaken nostalgia in me even further. And for some reason, the personal memories, newspaper headlines, and a growing awareness of striking images friends kept sharing on social media began to coalesce. I think it was a fortuitous, happy moment of a lot of ideas merging. But if it hadn’t been for my lesson on Gertrude Stein, I perhaps would not have been in the proper mental state to be making the connections I did. My students, too, gave me that extra energy to keep working on these pieces: they inspired me with their own poems.

If I had to summarize The Drowning Book in a single blurb, it would be as follows: Anchored in contemporary issues that could be anywhere, any time, The Drowning Book examines the dissociation between action and feeling (particularly as it pertains to women) and how we can reclaim human dignity both for ourselves and others.

It was surprisingly easy to select poems for this book. I say that feeling guilty and I hope I don’t sound flippant, but while it took some months to write the poem, assembling them wasn’t as challenging as I anticipated. I think I had half-consciously been organizing the poems for a while, not sure when or how they’d fully come together. This is the fifth poetry manuscript I’ve written and the first to be officially published (or selected for publication). It’s also the fastest I’ve ever put a book collection. I actually spent one weekend selecting poems, organizing them based upon instinct (I read my work aloud and simply trust my intuition), and then submitted it to an open-reading Finishing Line Press does every November. There is no fee to enter and I figured I had nothing to lose. What was more difficult was trying to get myself to stop writing poems that I thought could fit the overall premise of The Drowning Book. You reach this point where you know you need to move on to other projects but it takes a while to get your head out of the space. I began writing the poems in early 2015 and about seven months later, I was putting them together as a manuscript. These poems were reworked piecemeal—I certainly did not leave them as raw as, say, Stein would have. I tried not to force anything, though. A few poems actually haven’t changed at all since their first drafts. I do believe it’s possible to overwork a poem, and if I felt like something was getting too far from my original sentiment, I left the piece alone. A few older poems—including ‘Trouble Woman,’ which is one of the Psalm Contest poems I submitted to Structo and that was published in Issue 14—also made it in because I felt they fit the main themes of femininity, personal reflection, and how it feels to be drowning in a chaotic world. But even now, with 2017 nearly at the doorstep, I keep thinking about how other poems I’ve written since would have been a good fit. All in all, the poems themselves took some time to evolve in as natural a way as possible—but once they felt right to me, assembling them into The Drowning Book wasn’t as much as an effort as I anticipated.

There is a lot of mourning in The Drowning Book—unintentional but I think my subconscious was telling me something, or at least noticing that the media seems to be a deluge of horror stories and I was desperate to start making sense of it all. I’m still trying to make sense of it all.

The Drowning Book is published by Finishing Line Press in February 2017 and can be pre-ordered here.